Upon arrive in Istanbul, you will be greeted by Road Runner Travel representative and transfer to hotel. You will be briefed by your travel consultant at the hotel about your 5 Days Turkey tour. Rest of the day relax or check out the city.
Overnight in Istanbul.

After breakfast, you will be picked up by your guide from hotel for old city walking  tour.
We will visit Hagia Sophia, The Blue Mosque, The Hippodrome, Obelisk of Theodosius from Egypt, Serpentine Column from the Temple of Delphi, German Fountain, Grand Bazaar and Topkapi Palace, after the tour you will be transferred back to your hotel.
Overnight in Istanbul.

Early in the morning we will transfer you from your hotel to the airport. You will fly from Istanbul to Cappadocia to start 2 Days Cappadocia tour. Upon arrival at Cappadocia airport, you will be greeted at the airport by Roadrunner Travel represent and transferred to our office. From here you will begin your full day North Cappadocia tour.
We will visit: Goreme Panorama, Uchisar Castle (Byzantium period), Pasabag Valley, Dervent Valley, Goreme Open Air Museum, Kizilirmak River, towns of Urgup and Avanos which is famous with red clay pottery where you can try your potting skills. At the end of the tour you will be transferred to your hotel.  You have the rest of the day by yourself to explore Cappadocia.
Overnight in Cappadocia.

After breakfast check out. We will pick you up from your hotel to start our full day tour of South Cappadocia.
We will visit : Ortahisar Castle, Love Valley, hiking in Red Valley (Rose Valley ) which gets it’s name from the rose-colored rock, Cavusin Village and Underground City with its several floors.
At the end of the tour, you will be transferred to the airport for the flight from Cappadocia to Istanbul. Upon arrival at the Istanbul airport, you will be greeted by Road Runner Travel represent to transfer your hotel.
Overnight in Istanbul.

What is not Included: 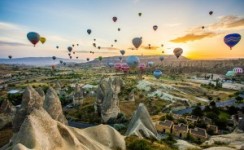