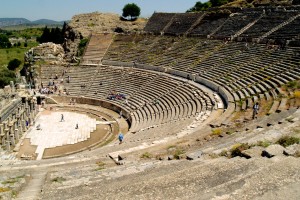 According to ancient inscriptions, Ephesus is thought to have been inhabited since around 3000 BC, roughly the same time as Smyrna, and evidence of Ion, Roman, Byzantine, Seljukian and Ottoman civilisations are still seen today. The ancient city was a good centre for trading, mainly because of its location close to coast, and religion. It was known for the cult of Cybele, the Anatolian fertility goddess, then later for Artemis, the virgin goddess for which a temple was built in her honour.

The temple was destroyed in 356 BC, and when Alexander the Great passed through in 334 BC he offered to pay for the cost of a new construction provided it was dedicated to him. The Ephesus people declined, and rebuilt it with great success.

When the Romans made Ephesus their provincial capital, it became a busy town with great commercial, trading and political importance, and a population that grew to around 250,000. A significant Christian community grew, and the city was visited by St John the Evangelist in the 1st century, then by St Paul, who was there between 51-53 AD and wrote some of his epistles. It was also the venue of two Ecumenical Councils.

But the success of Roman Ephesus began to dwindle, mainly because of problems connected to the harbour, which was the main source of trade. The Cayster River was pushing silt up the harbour and despite attempts to dredge it and rebuild the harbour, the sea was pushed back to Pamucak, 4km away, and therefore Ephesus lost its source of wealth. By the 6th century, the city was unliveable and was shifted near to St John’s Basilica, and by 1090 it was taken over by the Turks.

This huge site, one of the best preserved ancient cities in the Mediterranean, will take most of the day to see every part in detail. It is easily approached by road from Selçuk, or by public transport from Kuşadası.
Vedius Gymnasium and Stadium

Soon after the entrance to the site are the ruins of Vedius Gymnasium, which was built by a wealthy local businessman in the late 2nd century, in the name of Vedius Antonius. It is a magnificent structure, built as a venue for sporting and cultural education and contains exercise fields and covered rooms, baths, changing rooms, a courtyard and ceremonial room in the centre. To the south is the Stadium, where races, games, and Olympic events took place.
Acropolis

There is a building dated to the 6th century BC on a hill known as Acropolis at opposite side to stadium. There is a temple dated to years of 350 BC at north – west of the hill.
Byzantine Public Baths

After Stadium way coming across to the Byzantines public baths.
Church of St Mary (Double Church)

Near the Byzantine public baths, this Church holds a special importance in Christian history. Built between the 2nd and 4th centuries AD, it was originally a museum and venue for lectures and debates. It was destroyed by fire in the 4th century and rebuilt as a church, which became the venue of the third Ecumenical Council in 431. It is the first church to be dedicated to the Virgin Mary.
Port Public Baths

The public baths first built at 2nd century AC, it restored and some changes made on building at the 4th century empire in empire Konstantinus period.

Beyond the church is Arcadiane Way, a huge wide street over 500m long and 11m wide. Named after 5th century Byzantine Emperor Arcadius who renovated it, it was the street which ran towards the port, and where kings were greeted and religious ceremonies took place. The 400m long Marble Street, also known as Sacred Way, begins at the base of the theatre and runs alongside the agora and Serapis Temple, and was rebuilt during the 5th century.
Theatre

This is one of most beautiful and best preserved of all the ruins, and is used as the venue for the annual Ephesus Festival. With a capacity of 25,000, it was built during the Hellenistic period, with reconstruction continuing during Empire Claudius’s times, and finalised between 98-117 AD.
Marble Street

Marble floored street that starts from Magnesia gate placed at south – east of Ephesus and lie towards the Koresos gate placed at north – west of city, approximately 400 m long street is rebuilt at the 5th AC.
Library of Celsus

The library is adjacent to the commercial Agora, built by Asian consul Gaius Julius Aquila, in 135AD, in memory of his father who is entombed here. In a building showing all the characteristics of Roman architecture, the front is ornately decorated with replicas of statues of four women between the front columns, symbolising mind, destiny, science and wisdom. The originals are in the Vienna Museum.
Love House

When you go up from marble street, at the cross section point with Kuretler street Love house can be seen. This interesting house dated to first century AC, consist of one main hall and many rooms connected to this hall. It is estimated that the mosaic girl portraits found in love house are figures of working girls in this building. It is very interesting that in the love house there is and heating and cooling system present equivalent to today’s air condition system. It is known that there were wine granaries, huge ovens, public baths, pools, bed rooms, conference saloons and a magnificent library.
Skolastika Public Bath

A wealthy Roman woman, Skolastika, restored these baths in the 5th century, although they were probably built 400 years earlier. They were heated by a central heating system, and are an interesting example of the use of marble. Her headless statue adorns the entrance.
Hadrian Temple

This is one of the most beautiful buildings on Curetes Way, although only the front façade remains today. In the architrave is an interesting mythological scene, depicting Andoklus killing a wild boar.
Trajan Fountain

Next to the Gate of Hercules and near the Temple of Hadrian, is the Trajan Fountain. There used to be a huge statue of the emperor decorating the fountain, which is now exhibited in Ephesus Museum.
Slope Houses

Near the Library of Celcus, at the bottom of the slope of the mount, is a row of houses that were thought to be the residences of the wealthy people of Ephesus. The recent restorations pay close attention to their original form of opening straight onto the street with wide stairs, walls decorated with mosaics and frescoes, and marble plating.
Temple of Domitian

This is the first temple to be built in the name of an emperor, dedicated to Emperor Domitian (AD 81-96). Opposite this was the governmental agora, which was placed in the most central and beautiful place in the city. The head and arms are the only remaining pieces of the huge statue, which are exhibited at Izmir Archaeology Museum, and the entrance pedestals are at Ephesus Museum.
City Hall (Prytaneion)

On the right of the assembly palace, a Hestia altar with a sacred fire burning continuously is accepted as a holy site. This was the venue of political duties, important ceremonies and official greetings, and one of the most important religious places in Ephesus.
Odeon (Bouleuterion)

It is known that the first ephesus settlements was built around these temple place, which collapsed by an earthquake than ephesusians built temple more imposing by the support of Roman empire. Ephesus Artemis Temple known as one of the seven wonders of world today only base ruins remained.