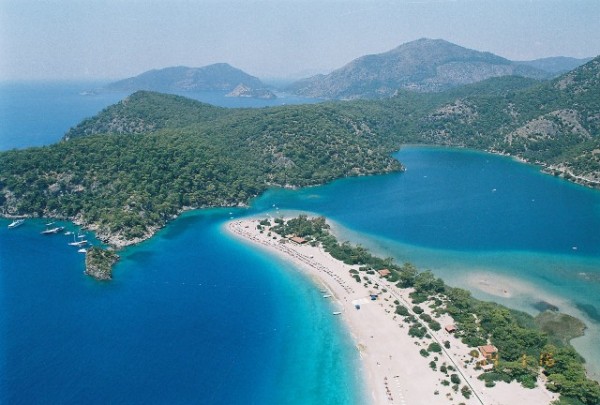 Fethiye with its cultural wealth, natural beauties and geography, is among the important touristic centres of Turkey. It is famous for its works of art belong to Persians, Lycians, Carians and Romans. This charming county is in a bay within Fethiye Gulf where both large and small islands are scattered. The rear of the bay is surrounded by pine forests.

The ancient name of Fethiye, which was a coastal city at the borders of Lycia-Caria, is Telmessos. There is not definite information about the foundation of this Ancient city. According to the first written records, it has come into existence in the 5th century B.C. Telmessos, separate from Lycia, survived as an independent city for a long time. The city experienced the rule of Persia, Alexander the Great, Rome, Pergamum Kingdom, Byzantium, Menteşeoğulları Principality and Ottoman State respectively.

The Museum has two exhibition halls namely, Archaeology Hall and Ethnography Hall. In the Archaeology Hall, there are ceramic works and statues. Among these, there is a Young Girl’s Statue with a Dove and a trilingual stele, which has played an important role to analyse the Lycian language. Hand woven works special to the region, silver jewellery and dastar (head scarf) loom are exhibited in the Ethnography Hall. In the open exhibition, big stone works of art, tombs and Izraza Monument can be seen. The Museum is open everyday except Monday from 09.00 to 18.00.
Ancıent Cıtıes

There are the remains of churches, chapels and civilian buildings of Byzantium Period on the island reached by boats from Ölüdeniz (Blue Lagoon) and Gemiler Bay. The island is important due to having been one of the first centres where Christianity began to spread.

At a distance of 40 km from Fethiye, Araxa was founded on the place where the Ancient Xanthos Brook flows. This wonderful natural water spring has been the subject of many mythological stories. In the ancient city within the borders of today’s Ören village, rampart ruins, a public bath and the water canals of Byzantine Period, have survived up to the present day.

At a distance of 45 km from Fethiye, Tlos is one of the six big cities of the Lycian Federation. The sport centre of the federation is also Tlos. It is known as the city where mythological hero Bellerophon and his winged flying horse Pegasus lived. Determined as the oldest city of Lycian Region by the archaeological excavations, Tlos dates back to the time before 2000 B.C. The graveyard on the natural rocks of the city acropolis was filled with most elaborate house-type tombs Of Lycia. It is known that the king-type tomb in the necropolis is dedicated to Bellerophon.

Situated 55 km far from Fethiye, Lettoon was the religious centre of the Lycia Federation. It is well known for three temples dedicated to the Goddess Leto, Goddess Artemis and God Apollo. Archaeological excavations have been carrying on since 1962 in Lettoon and the churches of the early Christian period are uncovered.

It is on the foothills of Mount Akdağ, 55 km from Fethiye. One of the most biggest cities of Lycia Federation, Pınara is known as the city where the first beauty contest is held. The temple, dedicated to the Goddess Aphrodite, also draws attention in the city as it was built in an unusual architectural style. Hundreds of public tombs in the shape of pigeon holes make necropolis unique.

It is at a distance of 25 km from Fethiye within the borders of Üzümlü village. It is known as the last city joined to the Lycian Federation. The city, was quite destroyed due to natural reasons arising from its different geography. The city with its theatre, agora, complex of stadium- public bath and monumental tombs, unearthed after the excavations carried out by Fethiye Museum, has become very popular in recent years.

Kayaköy was a settlement region of Rums (Greeks of Turkish Nationality) in the 14th century. It was founded on the lands of ancient city Karmillassos which had been demolished almost completely excluding a few home-type tombs due to earthquakes. Its ancient name is Levissi. Becoming united with the people of surrounding five Turkish villages and teaching humanity on the concepts of friendship, brotherhood, and peace throughout its history, Kayaköy is one of the most important regions to be proud of. According to the agreement of population exchange signed between Turkish and Greek governments in 1922, Rums living in Kayaköy were exchanged by Turks living in the western Thrace.

As mentioned in the ancient sources, there was a big theatre in Telmessos. During the drill excavations carried on by the Directorate General of Fethiye Museum in 1993, seats of the theatre were found 3-4 meters under the soil layers formed because of erosion. After the excavations concluded in 1995, all the extant remains of the theatre were re-surfaced. Built in the early Roman Period and repaired in 2000 AD, it is known that the theatre with a capacity of 5000 seats was used as an arena. At present, the theatre has a seating capacity of 1500 people.

The Mosque was built by Cezayirli Hasan Pasha in 1792. Kemer Bridge, Pasha Inn on Yayla road and Aqueducts in Yaka village were also acquired to Fethiye by Hasan Pasha.

Fethiye with its 4th century works of art remaining from Lycia period attracts attention. These are the tombs, carved out on natural rocks, which became the symbol of the district. Amintas which is the most elaborate of these tombs can be reached via many regular stairs. It can also be seen easily from the plain below and the admiration for its greatness increases when approached. At the centre of the left-side column, ‘ Herpamias’ son Amintas ’ was written in the alphabet of 4th century B.C. The identity of this man is not known exactly. There are many tombs worth to be seen in the district. The most important one of these, is the tomb which belongs to the Lycian Period. The tomb, ascending from the sea, has an interesting appearance. On the front side of two storeyed tomb there are quadrangle carvings resembling wooden beams and a gothic style arched cover. Both sides of the cover were ornamented with frescoes depicting wars, and it is thought that these are related to the life of Amintas.

It is supposed that the castle, ascending in the south of the district, belongs to the Knights of St. John. There are two small and simple rock tombs on the east side of the hill excluding a few writings carved out on the walls and a cistern of which date is indefinite.

Ölüdeniz, described as ‘the Eden bestowed by God to the World’, has a 3 km long beach. One can appreciate fully the beauty of swimming in a colour harmony of light and dark blue combined with light and dark green. Having an appearance of naturally lagoon with its tepid and standing water during ten months of the year, Ölüdeniz is one of the most preferred destinations by both local and foreign tourists.

Kumburnu separates Ölüdeniz from Belcekız Beach which is at the distance of 14 km from Fethiye. There are many boarding-houses, camps, motels and restaurants that are open during each season of the year.

Kıdrak with its sandy beaches surrounded by pine trees and crystal clear water is at a distance of 3 km from Ölüdeniz and Belcekız Beach.

Sweet coastal village at the end of Kıdrak road, is a resort place for wanderers with its wild nature, appropriate climate, friendly people and its attractiveness.

At a distance of 5-7 km from Ölüdeniz, this interesting canyon is surrounded by approximately 350 meter high mountains. It takes its name from the butterflies called as ‘Jarsey Tiger’ and seen between June and September. Transportation to the bay, being an Earth Eden with its waterfall flows both in summer and winter, large beach, clear water, brightly shining pebbles and oleanders decorating the environs, is provided by boats from Ölüdeniz.

Possibilities like a camping area with tent sites, restaurant, bar, shower cabinets, changing cubicles, etc. are offered in the valley which is the meeting place of world wanderers.

It is 50 km from Fethiye, next to the Karaçay Brook which forms the province borders of Muğla-Antalya. It is a unique natural wonder hiding within a 18 km long magnificent canyon of which height reaches to 600 meter in some places. With its steep rock cliffs, plane trees, clearly flowing spring waters, it is a unique tourism centre which offers possibilities for nature lovers such as mountaineering, trekking and swimming.

Yakapark, formed by the nature of human labour and creativity, is a unique recreation spot where you will experience memorable moments in a mysterious atmosphere with bird sings and sound of water. It can easily be accessed via 2 km road from Yaka Village.

It is 30 km far from Fethiye on Fethiye-Muğla highway. Having an appearance of a small charming fisherman town, Göcek has recently become one of the important centres of yacht tourism. Besides its natural harbour, it is a unique tourism heaven with its numerous islands and bays, ruin places and pine forested hills. The town with its marina and increased number of modern facilities, is at a distance of 20 km from Dalaman Airport.

Because of being one the important resort places of Blue Voyagers, the region is named as ‘Inside the Darkness’ by fishermen. It is consisted of islands and Kapıdağı Peninsula adorned with numerous beautiful bays. Yassıca Islands, Hamam Bay, Kurşunlu Bay, Yavansu, Bedri RahmiBay, Tersane Island, Göbün Bay, Boynuzbükü, Göcek Island, Domuz Island, Zeytin Island, Kızıl Island, reached via daily tours from Fethiye and Göcek, are also named as “12 Islands” within the region.

Besides two big holiday villages of the district, there are also natural bays namely Mempaşa, Küçük Samanlık, Boncuklu, Kuleli, Aksazlar, Akvaryum, Turunç Pınarı on the peninsula to where local people have daily tours.

It is 17 km far from Fethiye on Muğla-Fethiye highway. With its frequent pine trees stretching to the sea, the bay displays a beautiful harmony of blue and green. In the bay, there is a forest resting area offering the services of car park, buffet, shower cabinet and toilet. It is an ideal excursion place and a camping area with tent sites.

The bay is at a distance of 18 km from Fethiye on the Muğla highway, and is ornamented with rarely seen sweetgum trees having a nice smell. The daily excretion of sweetgum trees is used in the treatment of itchiness, asthma, bronchitis, ulcer and gastric diseases. It is also used in the industry of perfumery.

Being one of the popular places of the district in respect of tourism, Çalış Beach is 5 km from the district centre, opposite of the Şovalye Island. Along the 4 km long beach, there are hotels, boarding-houses, camp sites and restaurants. The Beach is well known as one of the incubation areas of the sea turtles, Caretta Carettas. It is also one of the favourite places to view the sunset and play water sports.

These two typical Turkish villages in Ölüdeniz (Blue Lagoon) have recently become shopping and entertainment centres providing accommodation. At present, these villages near draw the attention of especially foreign tourists.