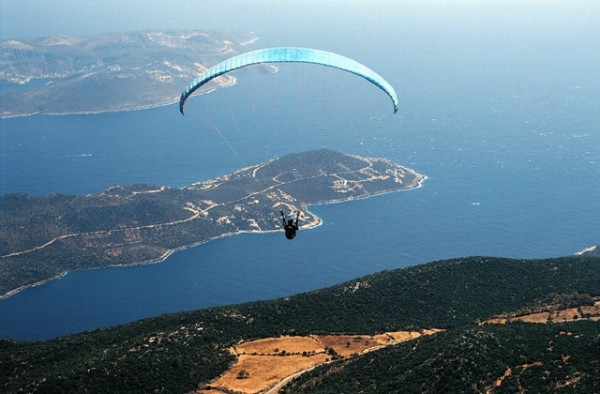 Kas was one of the most important cities of Lycia, and is now a small resort with great historical interest. Its quaint town centre has a rocky waterfront, with good beaches nearby. There are watersports available in the area, such as; canoeing,jet-skiing, diving and paragliding, plus cavern diving, which uses technical equipment to explore the deep and dark caverns. For those who love travelling on the water, the Mavi Yolculuk (Blue Voyage) tours, and other excursions on boats, can be madeto the surrounding islands.

Habesos is the earliest known name of the ancient city, as proved from archaeological findings. But the name Antiphellos is far more familiar, and this was the harbour of ancient Phellos. Excavations here have revealed a settlement dating back to the 4th century BC, possibly earlier, although it reached its height of importance during the Roman and Byzantine periods, when it was a centre for Bishops. It had also been significant in the world of sea-faring commerce, and during the Roman era wasespecially famous for its exported sponges. It was attacked by Arabs, then added to the territory of the Anatolian Seljuks, and took the name Andifli. After the destruction of the Anatolian Seljuk state, the Ottomans added it to its lands. The name Kas means ‘eyebrow’, or ‘something curved’,describing the shape of the town under the backdrop of 500m high cliffs behind.

Summers are hot and dry in Kas, quite typical of Mediterranean region, and the temperature can reach around 35 degrees during the day. Winters are warm during the day although can get cool at night, and can drop below 10 degrees.

Where to Visit from Kas

An ideal place to escape the summer heat is Gombe, 60km north of Kas, in the cool plateau of the Akdag mountain range. The forest-covered route with pine and cedar trees almost conceal the village, famous for its cools springs and apple orchards.Akdag is the highest mountain in this range, reaching 3024m, and the villages of Yesilgol and Ucarsu are good for trekking. The herbs which grow in this area are used in local cooking and there are several restaurants in the main square. There is a famous festival of the local Tahtacis in June, and a farmers’ fair in late August.

A well-maintained and quiet harbour town Kalkan, is 25km in west of Kas. It is an attractive town, once a fishing village occupied by the Ottoman Greeks. It has become increasingly popular since the 1980s, with a large number of holiday villages covering the southern hillside. The small town centre which overlooks the bay is filled with quaint, traditional white-washed houses, shuttered windows and balconies with brilliantly-coloured flowers. The marina caters for the requirements of visiting yachts, aswell as several restaurants and shops in the main centre.Yacht Marina Tel: (0242) 844 3204, fax: 836 1030.

Beyond Tlos, Saklikent is a spectacular gorge cut into the Akdaglar mountains, which is 18 km long, the sides are so deep and steep that no sun penetrates, and therefore the water always remains icy cold. Access to the start of the gorge is along a wooden boardwalksuspended above the water, then after crossing the river, it is fairly straightforward to walk through the gorge for 6km. In the summer, there are tours arranged from Kas and Kalkan.Opening hours: Daily 08.00 – 17.00.

This is the original name of the ancient Lycian town, although there is little left of Antiphellos except a well-preserved ancient theatre and Lycian rock tombs. One of the most important of these ruins is the Monument Tomb, a Lychian inscribed tombmounted on a high base, dating back to 4th century BC, also called King’s Tomb. Another important item is the ancient theatre, dating back to 1st century BC which once had a capacity of 4000 people.
This well-preserved theatre is the only one in Anatolia to be overlooking the sea. It lies 500m west of the main square.Northeast of the theatre is a house-style tomb dating back to the 4th century BC. It has been constructed by cutting into the natural rock, lies 3.5m high with engravings of 24 girls dancing. Near Hastsane Caddesi, on the western coast of the town,there is a temple whose foundations date back to the Roman era.

Once a principle harbour of ancient Lycia, Patara was the birthplace of Apollo, according to Greek legend. This village covering a wide area on the eastern part of the harbour is 41km from Kas and has one of the best beaches in the area, a white goldenstretch around 20km long. Patara gained importance during the Byzantine period, because it was the birthplace of St Nicholas, the 4th century bishop better known as his other identity, Santa Claus. St Paul, one of Christ’s disciples, boarded a shipfrom Patara to Rome. The ruins lie 1km from the beach, and include several Lycian tombs, a basilica, Corinthian temple and a theatre. Access is possible by dolmus from most adjacent towns but, not at night. The Lycian Roman monuments can be seen when entering Patara. From the Vespasianus Hamam, constructed between 69 – 79 AD, the adjacent footpath reaches the main, marble-covered street of Patara. At the end of the street are the wide walls of theByzantine Castle, and east of that is the Corynth Temple. Patara Theatre, built in the 2nd century BC, is at the foot of the hill and had a capacity for around 10,000 people. It was filled with wind-swept sand but after cleaning revealed its structure, and archaeological excavations are still continuing. The beach is one of the longest in Turkey, with a width of up to 1500m. Declared a Special Environmental Preservation Region by the Ministry of the Environment, it is a major breeding area for the caretta-caretta sea turtles, and during thereproductive season there are strictly applied restrictions to preserve their habitat.

Along the east coast of the Esen River, 45km from Kas, Xanthos was the capital and grandest city of the Lycian Union, but has had a chequered history. Surface findings from the city acropolis reveals that the settlement dates back to the 8th centuryBC. Initial research was performed by Englishman Charles Fellows in 1838, which probably explains why the Nereidler and Harpyler monuments, the Payave Tomb and Aslani Grave were taken to the British Museum in 1842. The city walls were repaired during the Roman and Byzantium periods, and strengthened with additions to the width. At the south end, a gate dates back to 2nd century BC, and behind this there is Victory Arch belonging to Emperor Vesoasianus. To the southwest, the original settlement of the city is the Lychian Acropolis, now badly ruined, with a Byzantine Church.

The region of hills over the Felen Plateau, is 12 km from Kas, was a highly important city during the 4th century BC. Antiphellos was the harbour of Phellos, and some of the surrounding city walls still remain. Also surrounding the city is a tomb,decorated with reliefs, 4th century tombs and rock-cut graves.

Isinda, on the hills near Belendi village is 13 km from Kas, was a small Lycian city and surrounded by ramparts. In the middle of the city’s acropolis, two tombs with Lycian inscriptions are the main attractions. There are also many Lycian rock tombs fromthe Roman period.

This important plateau village is 20 minutes walks from Pirha ruins, an ancient city 850m above the sea. There are many rock graves, all facing the sea, and the tombs are more irregularly positioned. The statues and reliefs that were uncovered hereare now in the Antalya Museum.

80 km from Kas, this is another important plateau village, with ruins 15 minutes walk away. Neiseus, the city’s Lycian name, is written on the theatre wall. In Nisa, there are ancient ruins from the Lycian and Roman periods, and on the front of some ofthe tombs there are images of spears, shields, women and men. Coins produced during this time are exhibited in Antalya Museum.