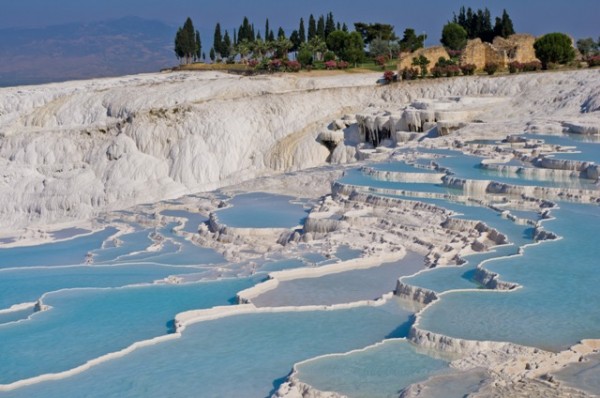 The stunning white calcium pools, which cling to the side of a ridge, have long been one of the most famous picture postcard views of Turkey. Pamukkale, literally meaning “cotton castle”, is also the site of the ancient city of Hierapolis of which there are many interesting ruins, and is a very popular destination for a short visit.

Pamukkale was formed when a spring with a high content of dissolved calcium bicarbonate cascaded over the edge of the cliff, which cooled and hardened leaving calcium deposits. This formed into natural pools, shelves and ridges, which tourists could plunge and splash in the warm water.
Hotels were springing up from the 1970s to cater for the large influx of tourists, and shortly afterwards UNESCO declared it a World Heritage Site. But by the 1990s, this took its toll on the state of the calcium pools and restrictions were placed on these travertine terraces. Many hotels were knocked down, visitors are only allowed on major paths around the sites, and must remove footwear to stand on the calcium deposits. This seems to have been a successful move, as the water supply is now used for preservation and some of the damaged calcium deposits have been strengthened.

The summers are hot and dry, and winters warm and rainy.

The old Roman Baths, is one of the largest structures in Hierapolis, which has been the Archaeological Museum since 1984. Inside are exhibits from excavations of the area.

The ancient city of Hierapolis, the original site of Pamukkale, was known as a Holy City in archaeological literature because of the abundance of temples and other religious structures in the area. Although there is limited information on the founding of the city, it is known that Eumenes II founded it and named it after Bergama’s mythical founder, Hiera, who was the wife of Telephos. It was an important centre during the Roman and Byzantine periods, and a centre of Christianity since the 4th century.

Now part of the Pamukkale Museum and south of the Thermals Baths, the layout of the Roman Baths is typical of the era: A wide courtyard is at the entrance, through which is a rectangular area with large halls on both sides. There is evidence suggesting that the interior’s huge walls were covered with marble. At the north and south of the main complex are two main halls essentially used for the private use of the Emperor, and for ceremonies. The remains of the baths date back to 2nd century BC, and the area is now covered with marble and a large section is part of the Pamukkale Museum.

Near the Museum are the foundations of the Temple, constructed on the Plutonium spring and dedicated to Pluto, the god of the underworld. It still gives off deadly poisonous gases and in front of the temple, a grate has been installed over the underground entrance to the spring to prevent inquisitive visitors. It was the site of an ancient religious cave, where Apollo met the mother goddess of Cybele, and sources suggest that she descended into the cave without being affected by the toxic fumes. The upper parts of the Temple date back to the 3rd century, and is accessible through a wide staircase.

The restored Roman theatre dates back to the 2nd century and the stage buildings and elaborate reliefs are in exceptionally good condition. Construction began in 62 AD by Flavius two years after a large earthquake, and completed in 206 AD. It once had a capacity of around 12,000, and adorned with columns and statues which were unearthed during excavations. On the backstage walls are marble bas-reliefs. The theatre is still the venue for the annual International Pamukkale Song Festival in June, during which 7000 spectators can be seated.

There is a cathedral, a church with pillars, and two other churches in the city centre belonging to the 6th and 7th centuries, with smaller chapels at the northern end of the city.
Goncalı Church (Laodicia Church): Laodicia Antic City, which is six kilometers north of Denizli, is founded on the hills between the current location of Eskihisar and Goncalı Villages. It took its name from Selekoses King, Antiochos’ II(250 B. C.) wife, Laodice, who was ruling the region. It was formerly known as Rhoas or Dios.

Two theaters, stadium, basilica, nymphaeum, temple, street with statues are monumental structures constructed during Roman age among the main ruins, which can be seen at the surface today.

The time when Laodicia had reached its highest wealth level coincided to the Roman and early Christianity period, and late Bizantium age. City was also improved as a therapy center at the same time due to the curing characteristics of hot water in city, which was coming from a foundation near Hierapolis.

As it is understood from the Holy Bible and other documents the natives of the city was totally indifferent to the new religion. First missionaries had believed that this behavior stemmed from their wealth, which prevented them to share. Laodicia was an important bishop center where Ecumenical Committee had met during 4th century A. D. In addition to this, its name is mentioned as one of the seven churches in revelation part of the last section of the Holy Bible. It means “Sound of Public” in Latin.

St. Philıppe Marytyrion (Ottogon, Pamukkale ): It was constructed in the name of one of the 12 apostles of Jesus Christ, St. Philippe, and on a high hill at the north of Hierapolis antique city center. St. Philippe had firstly come to Hierapolis in 80 A. D. and wanted to extend the believers of Christianity,however he had been killed at the place where Martyrion had been constructed. It is known that Martyrion was constructed in the memory of St. Philippe during the end of 4th century or at the beginning of 5th century. The grave of the St. Philippe is thought to be within this central chamber.

Hierapolis St. Cathedral: It is in the city center of Hierapolis, between Agora and Theater and north junction point of Column Street.
Church: Excavation of the church, which is approximately 150 m. away from the north of Hierapolis Theater, was performed during previous years. The church is dated to the 5th century with its rectangular plan.

The necropolis, in the northern end of the old centre, is the largest in Asia Minor and continues along both sides of the road for nearly 2km. Limestone and marble were both used during the construction of the graves, although marble was more common for the tombs. The northern necropolis includes characteristics of tombs, graves and monuments, which date back to early Christianity. The tombs that have architectural characteristics of houses are considered the most valuable parts of the necropolis.

Founded on the southern back of the Curuksu River, the site of ancient Laodiceia, or Laodikya, is 13km south of Pamukkale. According to ancient sources, the city was established by Antiochus in 261-263 BC, and named after his wife.

This was one of the most important and renowned cities of Anatolia in the first century BC, and the majority of works of art here belonged to this period.

The Romans put great importance to Laodikya and declared it as the centre of Cybria. The whole area contains the largest stadium in Asia Minor, a gymnasium and baths complex, and the foundations of an Ionic temple. The region contains one of the seven known churches of Asia Minor, which indicates the high esteem in which Christianity was placed. A destructive earthquake levelled the city in 60 AD.

Constructed in typical Roman architectural style, the Grand Theatre is in the northern area of Laodikya. Although the stage has been completely destroyed, the areas for the orchestra and audience are in good condition, and has a capacity of around 20,000.

The waters of this spring, which is part of the Pamukkale system, is 5km south of Pamukkale and considered to be good for the heart, hypertension, rheumatism, sciatica, lumbago and skin diseases.
Pamukkale Thermal and Mineral Springs

The lime solution in the water, which comes from the travertine pools 18km from Pamukkale, has therapeutic qualities that have been acknowledged for centuries. Religious ceremonies and festivals have been performed around the source of the spring, and it was a popular destination for wealthy and powerful people who came to be cured of their ailments.